Where paipo boarders gather to discuss their boards and share ideas. Visit the paipo website at https://mypaipoboards.org/.

Working at SHACC the past few years I've been blessed to be able to schmooze with some of surfing's true greats. I never know which one of my boyhood heroes is going to walk through the door. A few days ago while I was working in the showroom, Carl Ekström, one of the brightest minds in surfing stopped by and made good on an offer to loan me his super high tech, hydroflex body board for evaluation.
I took the board out yesterday for a short session in some peaky 2'-4' beachbreak. I have to say I was impressed. I'll take some more photos of the board when I have a chance. Paipo surfer in repose,
Nose on the nose,
No grunting he-man pose.
See how fast he goes!
What is it he knows?
Top

You're not looking too grumpy. The deck certainly appears different. Is the board made from standard bodyboard materials or not? What's the bottom like?

That one looks sleek and elegant...

Would love to see more photos from different angles and the other side.

Always had lot of respect for Ekstrøm and his creations
Top

I've only had the board out once; it's much faster than your run o' the mill BB. So very different from my usual gear but I had no problem getting used to it.
It's very light weight but stiff as well.
Hope to get a few more sessions this week, weather and commitments permitting. Busy week ahead. The board is NOT standard bb construction.

In this shot you see the plug which covers the Hydroflex pressurization hole. Pretty high tech. I feeling honored as I'm the only one whose ridden this model.
Paipo surfer in repose,
Nose on the nose,
No grunting he-man pose.
See how fast he goes!
What is it he knows?
Top

It would be exciting to see a video of Carl talking about how the design work.

I would love to have a go on it.
http://www.sdfsurfboards.co.uk/ built my paipo!
Top

Every time I look at that board ( especially because of the vent plug) it reminds me of a hollow plastic kayak..
So it gets me to wondering has anyone ever produced a bodyboard that way?
And what might be some of the problems doing it that way?
Top

Any updates on how this ekstrom goes?
Top

Every time I look at that board ( especially because of the vent plug) it reminds me of a hollow plastic kayak..
So it gets me to wondering has anyone ever produced a bodyboard that way?
And what might be some of the problems doing it that way?

Late 1960s I believe, somebody made some bellyboards out of plastic. I'm sure the archives have a copy of that ad. Nobody remembers them, no nostalgia, which leads me to guess they weren't all that graet.

Off the top issues: high cost of tooling, consumer resistance to "plastic", heat up in the sun so wax would come off, any "traction" on the decks (like pebbling effect) would be abrasive, any design changes would require nearly complete re-tooling, no flex, generally limited marketplace. I think bodyboard materials have been seen as an improvement over something like rotomolded plastic.

That said, the nearly-dead U.S. sledge/hydrospeed/riverboard sport has seen several rotomolded or formed hard plastic boards. The world of river sports is less burdened by some the surfing's traditional mysto baggage, in part because of their need for durability. It's proven tech for boats.

In the 80's, Voit made a full bodyboard size version of their "Freerider" kickboard called the "Speedrider". Few, if any, Speedriders made it to Hawai'i so I never got to try one, but I did own a Freerider. It worked ok and was convenient to transport on the public bus to Sandys. I remember it was also really cheap - affordable even on my chore money. I wish I saved that board as a collectible (like a lot of things I had as a kid). I ended up giving the board to the younger generation of the family who ultimately left it stored outside exposed to the Hawaiian sun. I went back for a visit, picked up the board and it disintegrated into bits.

airboy808 wrote:Any updates on how this ekstrom goes?


We are suffering thru our typical June Gloom, overcast, onshore and uninspiring ankle high surf so the Ekström waits for better conditions.

RE: Rotomolded boards,
I have the smaller version of the BAQ Wava mentioned in a post by Poobah some years back 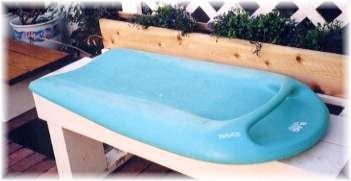 http://mypaipoboards.org/forum3/viewtopic.php?f=4&t=99
Paipo surfer in repose,
Nose on the nose,
No grunting he-man pose.
See how fast he goes!
What is it he knows?
Top

The BAQ Wava looks like something that could break your arm or your face!
Top

That Wava board is the same as the Freerider except for the color.Voit must've sold it off. Yes, dropping into heavy Sandys shorebreak with both hands on the handle felt like it was going to snap your wrists sometimes. It was safer to put the outside hand on the rail on the really vertical ones. The plastic wasn't very hard and the board was hollow, so no big deal if it hit you.
Top

Somewhere back in the Jetson Era, Union Carbide made something called the Captain Swim-Surfer.
Bottom handles...I can dig it.

Any more water time on the board unklegrumpy?

Return to “Paipo Board Design & Building”

Users browsing this forum: No registered users and 1 guest